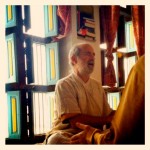 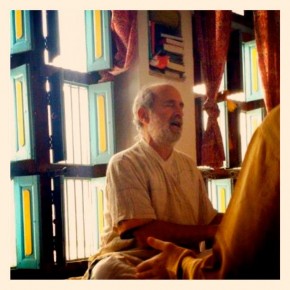 We have not all had a chance to speak our loving words to Shyam. There will be more to come. This was received from Jahnavi who is getting ready to record her solo record. Please enjoy her offering.

To my dear Uncle Shyam,
Much has been written about you by those who are more qualified to encapsulate who you are in your entirety. As I bring you to my mind’s eye, or play one of your signature tunes on the harmonium, I just feel deeply grateful for the sanga I was able to share with you.

Growing up in a fairly insular Vaishnava community, my first experiences of doing kirtan in the broader ‘yoga world’ were sometimes bewildering or distasteful. The ISKCON youth trying to do so, were making an outreaching endeavour that our parent’s generation had not been so interested in previously. In trying to establish and transplant a whole spiritual, cultural movement to the West during the 70s and 80s, many of them became necessarily inward focused and reluctant to engage in interfaith/interlineage dialogue for fear of diluting or muddying what their teacher had given them. Now we as their children began to reach out to this broader spiritual community, not sure what we would find. In 2009 a group of us, myself, Gaura Vani and the Mayapuris, embarked on a cross North America kirtan tour and our first stop was near Albany, where we connected with you.

You took us, a pack of 2nd generation Hare Krishna kids out for an afternoon stroll through the woods. I didn’t know much about you, but was instantly charmed by your unapologetic dhoti wearing; the way you trudged along the forest paths with us, chatting about this and that, then would suddenly launch into a Brijbhasa stanza on the groves of Vrindaban, or the dazzling beauty of Krishna. We were surprised to feel at home with you, especially when you sat us down on a picnic bench and pulled out a baggie of prasad from your daily worship.

Even after this first meeting, it took me a while to get used to your kirtan. Growing up in the ISKCON Gaudiya Vaishnava community, I have been trained to be naturally wary of eccentric displays of enthusiasm or emotion in a devotional context, especially in public gathering. This cautionary attitude is encouraged to try to prevent ‘sahajayism’ – the external show of a much higher level of devotional ecstasy than one is actually qualified to experience. I was initially alarmed by the way you sang with barely containable gusto, frequent jokes in both Hindi and English, shuddering shoulder shakes and sometimes a Joe Cocker growl – I couldn’t put you in a box, but soon I couldn’t help feeling deep affection either. You were just being you – uniquely Shyam, able to put everyone at ease with good humour, before singing to your Lord with true depth and gravitas.

As we traversed the yoga and spiritual communities of North America and further afield, I quickly became accustomed to encountering a broad spectrum of ideas about spirituality and bhakti, much more nebulous than I had ever experienced before. In the midst of much spandex and speculation, your straight talking presence was a balm. Where we were worried about whether or not traditional dress would cut the right image to share our offerings, you were totally cool in your airy bundi kurta, baseball cap and dhoti. Where we were struggling to juggle the navigate a new arena, you were in your element, bringing your baggies of homemade prasad, and discussing pure bhakti philosophy over lunch with whoever would listen. You became an instant Uncle, a well wisher and an ever ready source of wisdom, humour, and devotion.

Once over dinner you told a group of us how you had been waiting for years for the Hare Krishna kids to grow up and join you at the kirtan festivals. Your affection for us, and your open and enthusiastic way of sharing the teachings of your own Pushti Marg tradition was eye opening. Your passion for the Bhagavatam – recounting the stories of Sri Krishna’s pastimes, enthused us to take seriously the wealth that we had perhaps taken for granted through childhood.

Your sole motive was to inspire bhakti, to ignite a genuine love for Sri Krishna. Though you were a Sanskrit scholar, highly learned in the teachings of your own lineage and of others, and I am exactly the opposite, you would enthusiastically engage me in comparative discussion of our traditions. Once we sat in your temple room and you taught me a beautiful pada by one of the Ashtachhap poets on Radha and Krishna. With the Hudson sparkling outside the window, we dove into the poetry and could’ve been on the bank of the Yamuna – you had this ability to bring the colour and sweetness of the land of Vrindavan into a simple moment. Later in a long car ride you asked me to teach you the Siksastakam by Caitanya Mahaprabhu, and I did my best to carefully translate each word, though you could already understand so much. Though I knew historically our lineages were in some tension, with Sriman Vallabhacarya and Sri Caitanya both being titled ‘Mahaprabhu’, I found your respectful interest and enquiry touching and telling of your broad mindedness.

Whilst I was lucky to share many a kirtan with you, and play violin in most, pushing myself to wrap around the classical ragas you chose at different times of day, there is one time that we shared that I remember most fondly. You had asked me to come and play violin for your kirtan in Westport, Connecticut, but first needed to spend one night and day at your family home for the annual Schaffer family meeting. You encouraged me to come along, though insisted I would have to hide during the day as the meeting was highly private and my presence would be very inappropriate. I warily accepted and soon found myself being welcomed in a large, grand home, surrounded by towering trees. Coming from a North American Jewish heritage on one side, I somehow felt right at home with the odd mix of chit chat over bagels upstairs, and sitting with you in the carpeted basement, chanting japa as you performed your puja for Thakurji. You made the effort to cook for him even then, though it was practical – all in one in a rice cooker. Upstairs, we mingled with your gracious family, and I was touched to see the way they loved and respected you, despite the fact that you were clearly an oddball.

You explained to me that it was the family tradition to go to a fancy charity ball after the family meeting, and again, insisted I come. Everyone was dressed up in suits and fancy jewellery, and even you pulled out a blue sports jacket and ‘proper shoes’. Unprepared, I had only a cotton punjabi dress but held my breath and we dove into the thick of Connecticut’s moneyed partygoers. The evening was a lesson to me in Vaisnava behaviour. My grandfather-guru, A.C. Bhaktivedanta Swami Prabhupada used to say that you could recognise a Vaisnava by the fact that he was a perfect gentleman, and I observed this fully that night. Though we both felt out of place, I was impressed with how you connected genuinely with everyone and found ways to drop in spiritual encouragement in every exchange. The party boasted a buffet from all over the world, but every table contained a vast array of different non-vegetarian dishes. We looked at each other and without having to say anything, we made a bee-line for the bread rolls and sliced tomatoes. Loading up our plates we sat in a corner on two chairs, offered it mentally to Krishna and with a ‘Mahaprasad ki jai!’ tucked in. It was surreal, but gave me deep encouragement that a lover of God can remain a loving ambassador, no matter what the circumstances. Our simple bonding over our shared values reminded me how ridiculous it is when different lovers of God bicker amongst each other over slight differences in practise.

Thank you for diving deep into your own practise and sharing the wealth you found so openly with all. Thank for helping me to appreciate my own tradition more deeply, and for helping me to better honour others. Thank you for the poetic, creative, urgent, full, focused, ever curious way that you lived your life. If anyone showed a seed of interest in bhakti, you were ready to water them with affection, encouragement, and guidance until it flowered. For this, and so much more, thank you. I miss you, but I know that you will be wherever the kirtan is, so see you soon.